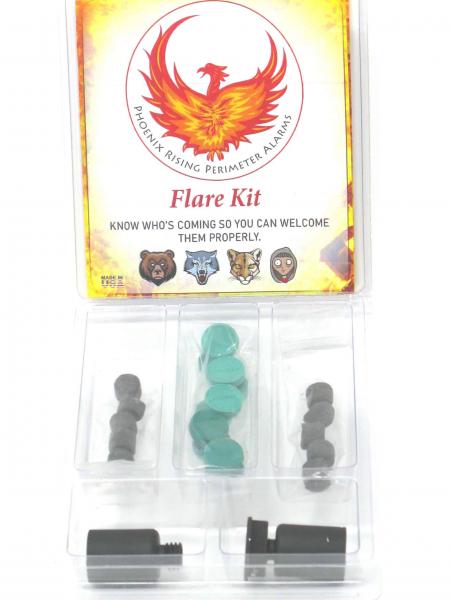 12 Gauge Perimeter Alarm Flare Kit. The Flare Kit for the 12 Perimeter Alarms add a whole new dimension to the security provided by the alarm itself. The flare kit can be used as a visual intrusion warning, but it can also be used as a signaling and search and rescue device. This is a great addition to the 12 Gauge Perimeter Alarm. The kit includes 2 CNC machined flare canisters, 1 CNC machined 12 Ga. canister adapter, 10 flare modules and 10 canister caps and complete instructions. The canisters are designed to be reloadable and can be used indefinitely. The flare and canister cap is a one time use item, but refill packs are available. The flares are launched by a 209 Shotgun Primer which is loaded into the base of the flare canister just as you would load the alarm with a 209 primer. The primer should be pressed into the canister base using a flat smooth surface. Do not strike the primer with a hard or sharp object. The canister is then screwed into the canister adapter. This may cause a premature detonation. When launched, the flare emits a very bright trail skyward for 150 to 200 feet. The flares are designed to be launched in a vertical position and are not designed to be hand held. For safety, the alarm and flare should be mounted to a stationary object just as you would normally mount the 12 Gauge  Alarm. The flare kit provides a visual aspect to the 12 Gauge Perimeter alarm that allows you to stay safe and be found in an emergency. As with all of the Phoenix Rising Perimeter Alarms, the Flare Kits are made in the U.S.A..