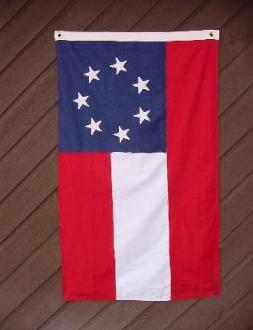 This is a CONFEDERATE 1ST NATIONAL FLAG. It is NEW. This flag was also known as the Stars and Bars. It was first raised over the capital building in Montgomery, March 4, 1861.It had seven stars representing the states belonging to the Confederacy at that time. During the remainder of that year six more states were added bringing the total to thirteen. During battle the final version of this flag was sometimes confused with the Union Stars and Stripes. It was replaced with the 2nd National Flag in 1863. It is COMPLETELY SEWN. It is NOT PRINTED. This Flag is made from 100% COTTON. It has a Cotton Canvas Header and Brass Grommets. The Flag Size is 4 Feet by 6 Feet. This Flag is BRAND NEW and NEVER USED. It is Excellent Quality and is Correct in All Details. Our Flags are COMPLETELY SEWN as were the Originals. We DO NOT Iron On, Stencil or Glue on Flag Components as some others do. Beware of Cheap Imitations claiming to be sewn. This is a Great Flag for Reenactors or any Civil War History Buff. It makes a Great Gift.