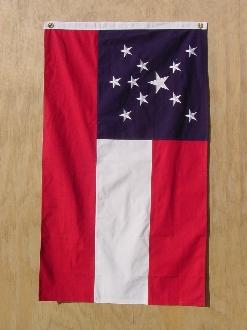 This is a CONFEDERATE 21ST MISSISSIPPI INFANTRY FLAG. It is NEW. These companies all tendered themselves, independently, to President Davis for service to the close of the war, and on being accepted went to Virginia as rapidly as possible. Companies A, B, C, D and E were organized in Virginia into the First Battalion Mississippi Volunteers, to command which Captain William L. Brandon was promoted as Major. There was considering transferring and orders for transfer, between this command and Taylor's Second Battalion, another command made up, like this, of companies tendered independently for the war. Such tenders were encouraged, in preference to enlistments for one year. Brandon's battalion was ordered to Manassas July 21. September 16, 1861, Captain Green's Vicksburg company, then at Richmond, was ordered, as soon as armed, to proceed to Manassas, and with Captain Dudley's company, already there, to be united with Brandon's battalion to form a regiment under the command of Col. B. G. Humphreys. It is COMPLETELY SEWN. It is NOT PRINTED. This Flag is made from 100% COTTON. It has a Cotton Canvas Header and Brass Grommets. The Flag Size is 3 Feet by 5 Feet. This Flag is BRAND NEW and NEVER USED. It is Excellent Quality and is Correct in All Details. Our Flags are COMPLETELY SEWN as were the Originals. We DO NOT Iron On, Stencil or Glue on Flag Components as some others do. Beware of Cheap Imitations claiming to be sewn. This is a Great Flag for Reenactors or any Civil War History Buff. It makes a Great Gift.