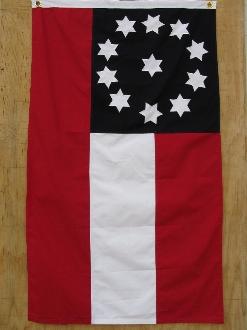 This is a CONFEDERATE 2ND GEORGIA REGIMENT FLAG. It is NEW. It is SEWN. The 2nd Regiment was organized at Brunswick, Georgia in June 1861, recruiting troops chiefly from Banks, Bibb, Burke, Jackson, Marion, Muscogee, and Stewart Counties. In the Antietam Campaign: The Regiment was posted on the bluff and in the pits overlooking and to the right of what became known as Burnside's Bridge on September 16th and 17th. Their commander, Colonel Holmes, was killed in action there on the morning of the 17th.Theodore T. Fogle, Company G, later wrote of the battle:"At a bridge on the Antietam Creek our Regiment and the 20th Ga., in all amounting to not over 300 muskets held them in check for four hours and a half and then we fell back only because our ammunition was exhausted, but we suffered badly, eight cannon just 500 yards off were pouring grape shot, shell and cannister into us and our artillery could not silence them. We held our post until Major William Harris ordered us to fall back. Our Col. (Col. Holmes) . . . was killed about half an hour before. . . ." "We went into the fight with only 89 muskets and had eight officers and 35 men killed and wounded. So many of the men were shot down that the officers filled their places and loaded and fired their guns."The remainder of the War:The Regiment was with the Army of Northern Virginia for most of its campaigns, except when it was detached to Longstreet in the West (Chickamauga, and Knoxville) in 1864. They were at Petersburg for the siege of 1864-5, and surrendered at Appomattox with 12 officers and 146 men present. It is COMPLETELY SEWN. This Flag is made from 100% COTTON. It has a Cotton Canvas Header and Brass Grommets. The Fly is Double Stitched. The Flag Size is 3 Feet by 5 Feet. This Flag is BRAND NEW and NEVER USED. It is Excellent Quality and is Correct in All Details. We DO NOT stencil, iron on or glue on flag components as some others do. Beware of cheap imitations. Our flags are COMPLETELY SEWN. This is a Great Flag for Reenactors or any Civil War History Buff. It makes a Great Gift.