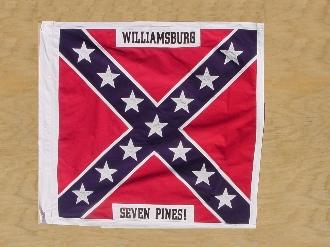 This is a CONFEDERATE 4TH NORTH CAROLINA INFANTRY FLAG. It is NEW. The 4th Infantry Regiment State Troops completed its organization in May, 1862, at Camp Hill, near Garysburg, North Carolina. It recruited its members in Iredell, Rowan, Wayne, Beaufort, Wilson, and Davie counties. Ordered to Virginia, the unit served in General Featherston's, G.B. Anderson's, Ramseur's, and Cox's Brigade. It was active at Williamsburg , Seven Pines , and the Seven Days' Battles, then shared in the campaigns of the army from South Mountain to Cold Harbor . Later the 4th was involved in Early's Shenandoah Valley operations and the Appomattox Campaign. It lost 77 killed, 241 wounded, and 6 missing of the 678 engaged at Seven Pines , sustained 58 casualties during the Maryland Campaign, and had 45 killed and 110 wounded at Chancellorsville . At Gettysburg the unit lost thirty-one percent of the 196 engaged, and 18 were disabled at Bristoe. The records show 8 officers and 101 men present on April 9, 1865. The Flag is COMPLETELY SEWN. It is NOT PRINTED. This Flag is made from 100% COTTON. It has a Cotton Canvas Header Sleeve and Ties as did the Original. The Flag Size is 51 Inches by 51 Inches. This Flag is BRAND NEW and NEVER USED. It is Excellent Quality and is Correct in All Details. The Actual Flag is Sewn. Our Flags are COMPLETELY SEWN as were the Originals. We DO NOT Iron On, Stencil or Glue on Flag Components as some others do. Beware of Cheap Imitations claiming to be sewn. This is a Great Flag for Reenactors or any Civil War History Buff. It makes a Great Gift.