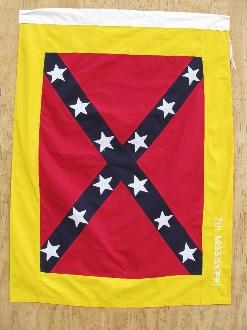 This is a CONFEDERATE 7TH MISSISSIPPI INFANTRY FLAG SEWN 52"X43"FLAG. It is NEW. The Seventh Mississippi was one of the original eight regiments called into state service under the first call for troops from Mississippi on March 9, 1861. The various companies were being enrolled from April to August and were mustered by various officers including Brigadier-General H.R. C1ark, a physician who had lived in Franklin County; Ms. The Seventh was a pleasing designation in Franklin County, as that had been the designation of Franklin County troops in territorial days.The companies were moved to Natchez, where they “boarded ships to the guff coast”. In late August or early September. It was intended by Governor John J. Pettus that the Seventh would become one of three regiments and a battalion for coast defense. It was organized on September 25, 1861, with headquarters at Bay St. Louis. The companies were scattered to Camp Goode at Shieldsboro, Camp Clark at Bay St. Louis and at Pass Christian. During this time, it was quite easy for a man to go home and join another regiment, or just go home. The men suffered from camp fever, pneumonia and measles. It is hard for us to believe today, but many died of the measles. The Flag is COMPLETELY SEWN. It is NOT PRINTED. This Flag is made from 100% COTTON. It has a Cotton Canvas Header Sleeve and Ties as did the Original. The Flag Size is 51 Inches by 51 Inches. This Flag is BRAND NEW and NEVER USED. It is Excellent Quality and is Correct in All Details. The Actual Flag is Sewn. Our Flags are COMPLETELY SEWN as were the Originals. We DO NOT Iron On, Stencil or Glue on Flag Components as some others do. Beware of Cheap Imitations claiming to be sewn. This is a Great Flag for Reenactors or any Civil War History Buff. It makes a Great Gift.