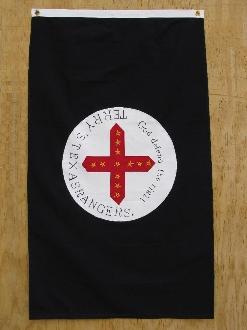 This is a CONFEDERATE 8TH TEXAS CAVALRY FLAG. It is NEW. It is SEWN. The 8th Texas Cavalry, (1861–1865), popularly known as Terry's Texas Rangers, were a group of Texas volunteers in the Confederate Army assembled by Colonel Benjamin Franklin Terry in August 1861. The "Terry Rangers" distinguished themselves at several battles during the Civil War. In four years Terry's Texas Rangers fought in some 275 engagements in seven states. In late March, 1861, Benjamin F. Terry, Thomas S. Lubbock and John A. Wharton were returning home from the secession convention, to which they had been delegates. Discussing the impending war, they resolved to offer a regiment of Texas cavalry to the Confederate government, then organizing at Montgomery, Alabama. It is COMPLETELY SEWN. This Flag is made from 100% COTTON. It has a Cotton Canvas Header and Brass Grommets. The Fly is Double Stitched. The Flag Size is 3 Feet by 5 Feet. This Flag is BRAND NEW and NEVER USED. It is Excellent Quality and is Correct in All Details. We DO NOT stencil, iron on or glue on flag components as some others do. Beware of cheap imitations. Our flags are COMPLETELY SEWN. This is a Great Flag for Reenactors or any Civil War History Buff. It makes a Great Gift.