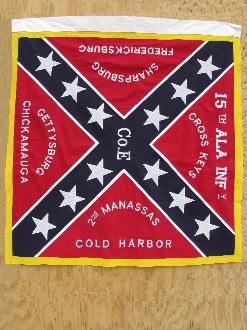 This is a CONFEDERATE 15TH ALABAMA INFANTRY FLAG. It is NEW. According to tradition, this flag was presented to the regiment (Col. James Cantey accepting) at Ft. Mitchell in the summer of 1861, by Miss Mary Chambers of Russell County. While the regiment probably did receive a flag at that time, this flag could not have been issued any earlier than November 1861. This flag was among those manufactured by three sewing circles in Richmond, Virginia at the request of Confederate Quartermaster Colin Selph. According to former Colonel A. A. Lowther, 15th Alabama Infantry, this flag was carried by the regiment during Stonewall Jackson's Valley campaign and fought under at the battles of Winchester, Cross Keys and Port Republic of that campaign. It was again fought under at Cold Harbor, in the campaign against McClellan below Richmond and at Cedar Run. The Flag is COMPLETELY SEWN. It is NOT PRINTED. This Flag is made from 100% COTTON. It has a Cotton Canvas Header Sleeve and Ties as did the Original. The Flag Size is 51 Inches by 51 Inches. This Flag is BRAND NEW and NEVER USED. It is Excellent Quality and is Correct in All Details. The Actual Flag is Sewn. Our Flags are COMPLETELY SEWN as were the Originals. We DO NOT Iron On, Stencil or Glue on Flag Components as some others do. Beware of Cheap Imitations claiming to be sewn. This is a Great Flag for Reenactors or any Civil War History Buff. It makes a Great Gift.