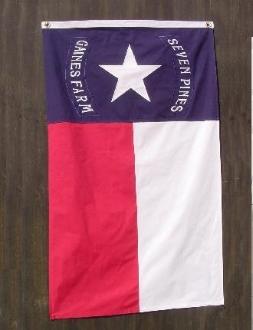 This is a HOOD'S TEXAS BRIGADE FLAG. It is NEW. It is SEWN. This flag was presented to the Texas Battalion in Richmond by President Jefferson Davis who inspired everyone on hand with the charge: "Texans! The troops of other states have their reputations to gain, but the sons of the defenders of the Alamo have theirs to maintain!"Hood's Texas Brigade won distinction on the battlefield as the most outstanding group of Texans and was considered as one of the finest fighting forces in Robert E. Lee's renowned Army of Northern Virginia. The unrivaled service record of the Brigade, in which almost 4,500 Texans served, added to the state's reputation for legendary courage, audacious battlefield heroism and self-sacrifice.As recorded on one monument to the valor of the men of the Confederacy:"Though adverse fortune denied final victory to their cause, History preserves their fame, made glorious forever."This Flag is made from 100% COTTON. It has a Cotton Canvas Header and Brass Grommets. The Flag Size is 3 Feet by 5 Feet. This Flag is BRAND NEW and NEVER USED. It is Excellent Quality and is Correct in All Details. Our Flags are COMPLETELY SEWN as were the Originals. We DO NOT Iron On, Stencil or Glue on Flag Components as some others do. Beware of Cheap Imitations claiming to be sewn. This is a Great Flag for Reenactors or any Civil War History Buff. It makes a Great Gift.