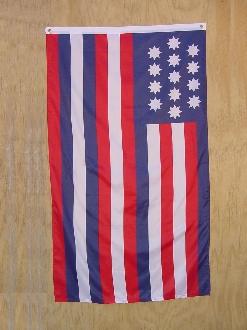 This is a JOHN PAUL JONES SERAPIS FLAG. It is NEW. This is the flag used on board the captured British ship "Serapis" in 1779, Captain John Paul Jones. This ship was captured following the famous sea battle between the "Serapis" and the "Bonhomme Richard" in which the latter's flag staff was blown away; the British Captain asked if Jones had struck his colors; and Jones replied "Struck, Sir? I have not yet begun to fight!" The "Bonhomme Richard" was so badly damaged that it sank with its colors flying. After putting into the Dutch port of Texel for refitting, the British authorities in the Netherlands demanded Jones be arrested as a pirate since he flew no known flag. The Dutch replied that they would consult their archives. Sometime between then and a few days later when they replied to the British that they had evidence in their files that the flag used on the "Serapis" was a recognized flag and that Jones would be allowed to refit. It is PRINTED. This Flag is made from 100% Polyester. It has a Cotton Canvas Header and Brass Grommets. The Fly is Double Stitched. The Flag Size is 3 Feet by 5 Feet. This Flag is BRAND NEW and NEVER USED. It is Excellent Quality and is Correct in All Details. This is a Great Flag for Reenactors or any American History Buff. It makes a Great Gift.