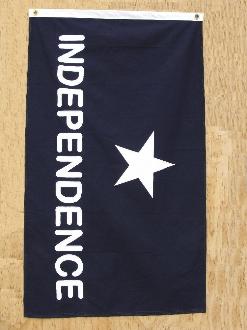 This is a CAPTAIN SCOTT'S FLAG OF INDEPENDENCE. It is NEW. It is SEWN. By the mid-1830's, the idea of independence from Mexico was gaining wide spread support in Texas. This growing theme became a movement, and its followers were known as independence radicals. Captain Scott was one of the independence radicals. These men were against negotiation, dialog, and delay . . . they supported an immediate declaration of Independence from Mexico. Scott had this flag made, which prominently featured his answer to the issues in Texas at the time; INDEPENDENCE. He realized that independence meant war, and he was ready for the fight. Captain Scott and his company of 30 men reported to San Felipe, the capital of Austin's colony, and they were deployed to Goliad. Colonel James Fannin and his men were also at Goliad at the time. Texas did Declare its Independence on March 2, 1836. Fannin, and all his men perished at the Massacre of Goliad, on March 27, 1836. It is COMPLETELY SEWN. This Flag is made from 100% COTTON. It has a Cotton Canvas Header and Brass Grommets. The Fly is Double Stitched. The Flag Size is 3 Feet by 5 Feet. This Flag is BRAND NEW and NEVER USED. It is Excellent Quality and is Correct in All Details. We DO NOT stencil, iron on or glue on flag components as some others do. Beware of cheap imitations. Our flags are COMPLETELY SEWN. This is a Great Flag for Reenactors or any Civil War History Buff. It makes a Great Gift.