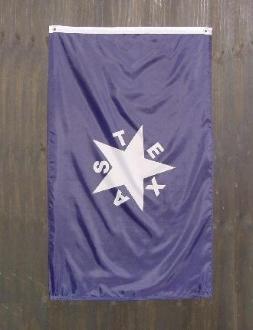 This is an TEXAS FIRST REPUBLIC Flag. It is also known as the De Zavala Flag. It is Sewn. It is NEW. The first Constitutional Convention had begun its work by declaring Texas' independence from Mexico, writing a new constitution and electing the first leaders. A committee of five delegates, all signers of the Texas Declaration of Independence, was selected and their choice for a design for a new flag was approved by the entire convention on May 11th, 1836. The elegant design was the work of Lorenzo de Zavala, the most accomplished statesman among the delegates. Interestingly, Zavala, a native of Spain, had served as Mexico's Secretary of the Treasury, Minister to Paris and as President of the Constitutent Congress in 1824 before siding with the Texans. This Flag is made from 100% COTTON. It has a Cotton Canvas Header and Brass Grommets. The Flag Size is 3 Feet by 5 Feet. This Flag is BRAND NEW and NEVER USED. It is Excellent Quality and is Correct in All Details. Our Flags are COMPLETELY SEWN as were the Originals. We DO NOT Iron On, Stencil or Glue on Flag Components as some others do. Beware of Cheap Imitations claiming to be sewn. This is a Great Flag for Reenactors or any TEXAS History Buff. It makes a Great Gift.