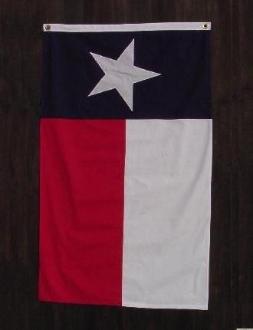 This is an TEXAS LONE STAR Flag. It is also known as The Third Flag Of The Republic. This Flag is VERY SUITABLE FOR OUTDOOR USE. It is Sewn. It is NEW. A month after Santa Anna was defeated, the Mexican government repudiated the treaties he signed and refused to recognize the independent sovereignty of Texas. Their threats of an invasion made a strong defense a continuing concern for the Texas army. On one foray in the spring of 1842, San Antonio and Victoria were taken and held for several days by Mexican forces.Even so the new republic flourished, and in keeping with the rising prominence of Texas, a more distinctive national flag was sought. Meeting in the village of Houston in January of 1839, the Third Congress of the Republic of Texas approved a new design by Charles Stewart, the second man to sign the Declaration of Independence.The strong growth continued; France officially recognized Texas in February of 1840 and opened a legation in Austin; England followed in 1842. However, annexation by the United States was still an important issue. It was hotly debated in several countries, including Texas, and was the deciding issue in the American presidential election of 1844. The vast majority of Texans, being Americans by birth, were in favor of the plan, and the issue was settled the next year. On February 19th, 1846, the flag of the Republic of Texas became the state flag of Texas, and three months later the United States declared war on Mexico. This Flag is made from 100% NYLON and has the Look And Feel Of Cotton. It has a Cotton Canvas Header and Brass Grommets. The Flag Size is 3 Feet by 5 Feet. This Flag is BRAND NEW and NEVER USED. It is Excellent Quality and is Correct in All Details. Our Flags are COMPLETELY SEWN as were the Originals. We DO NOT Iron On, Stencil or Glue on Flag Components as some others do. Beware of Cheap Imitations claiming to be sewn. This is a Great Flag for Reenactors or any TEXAS History Buff. It makes a Great Gift.