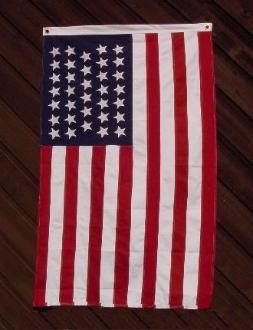 This is a CIVIL WAR UNION 34 STAR LINEAR PATTERN FLAG. It is NEW. This flag was the National Flag from 1861 to 1863. In 1861 one star was added representing Kansas. There were Thirteen Stripes representing the Thirteen Original Colonies. This flag is also known as the Lincoln Flag. February 22, 1861 president elect Abraham Lincoln raised this flag over Independence Hall in Philadelphia as a symbol that the Union would be preserved in the face of the coming secession of seven Southern States. It is COMPLETELY SEWN. It is NOT PRINTED. This Flag is made from 100% COTTON. It has a Cotton Canvas Header and Brass Grommets. The FLAG SIZE is 3 FEET BY 5 FEET. This Flag is BRAND NEW and NEVER USED. It is Excellent Quality and is Correct in All Details. Our Flags are COMPLETELY SEWN as were the Originals. We DO NOT Iron On, Stencil or Glue on Flag Components as some others do. Beware of Cheap Imitations claiming to be sewn. This is a Great Flag for Reenactors or any Civil War History Buff. It makes a Great Gift.